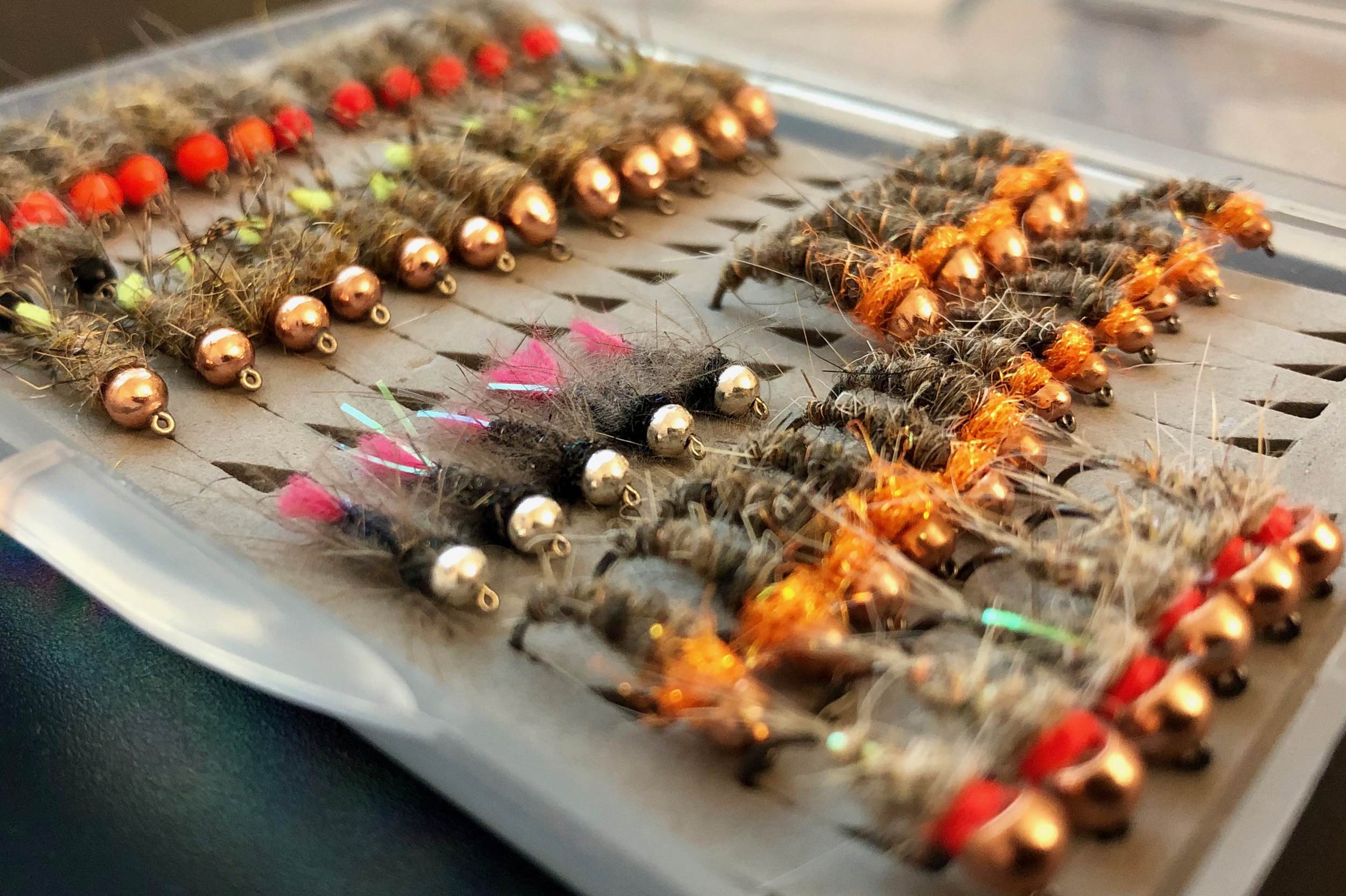 Nymphs are essential for successful fly fishing on rivers throughout the world. If there is no hatch and no fish rising then fishing nymphs is often the way to go. Nymphing techniques, of which there are many, should be bread and butter to every fly-fisher. Employing the correct nymphing technique is only part of the solution, selecting the 'right' nymph for the situation is key. River nymphs need to be small, with the correct silhouette and, very importantly, carry the right amount of weight. The weight required might be an un-weighted nymph, a leaded underbody, a metal bead, a tungsten bead, or a combination of lead and tungsten bead. I sell a variety of nymphs that will see you through the whole year, from spring trout fishing, through summer and into autumn and winter for grayling.

Czech Nymphs have to some extent gone out of fashion in recent years, to be replaced by tungsten beaded flies. In some ways this is understandable - there's no way I'd like to fish a river without a good selection of tungsten bead nymphs - but not to carry alternatives would be a big mistake. Many times fish simply shy away from tungsten beads. Czech Nymphs are the obvious alternative, offering trout and grayling the perfect profile of a caseless caddis larva, which are one of the most abundant food items found in rainfed rivers. Slim and heavy, they sink almost as quickly as bead heads, but without a shiny bead to spook the fish. Nymphs are usually fished in teams or two or three and particularly when fishing a team of three I prefer to split the beads up with a Czech Nymph between them. 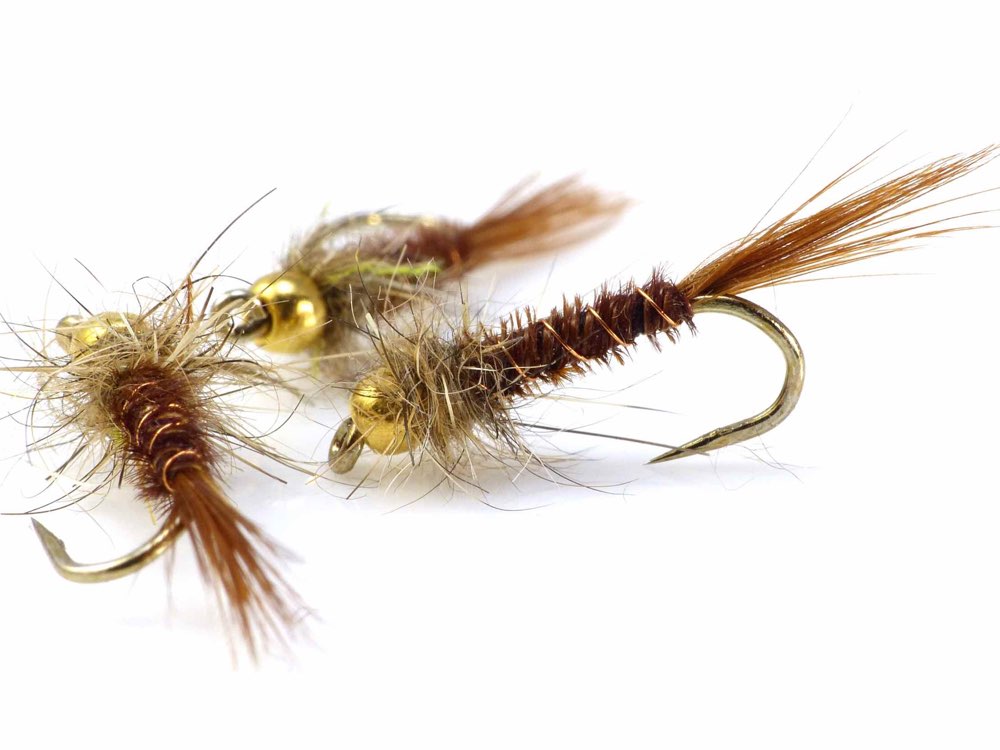 The Gold Head Pheasant Tail Nymph is nothing short of outstanding on rivers up and down the country. It a versatile nymph: I use it when upstream nymphing, as a point fly when fishing North Country Spiders and for fishing the 'duo' through shallow water. Once wet this fly looks so natural and juicy it's hard to imagine any trout refusing it! Size 16. 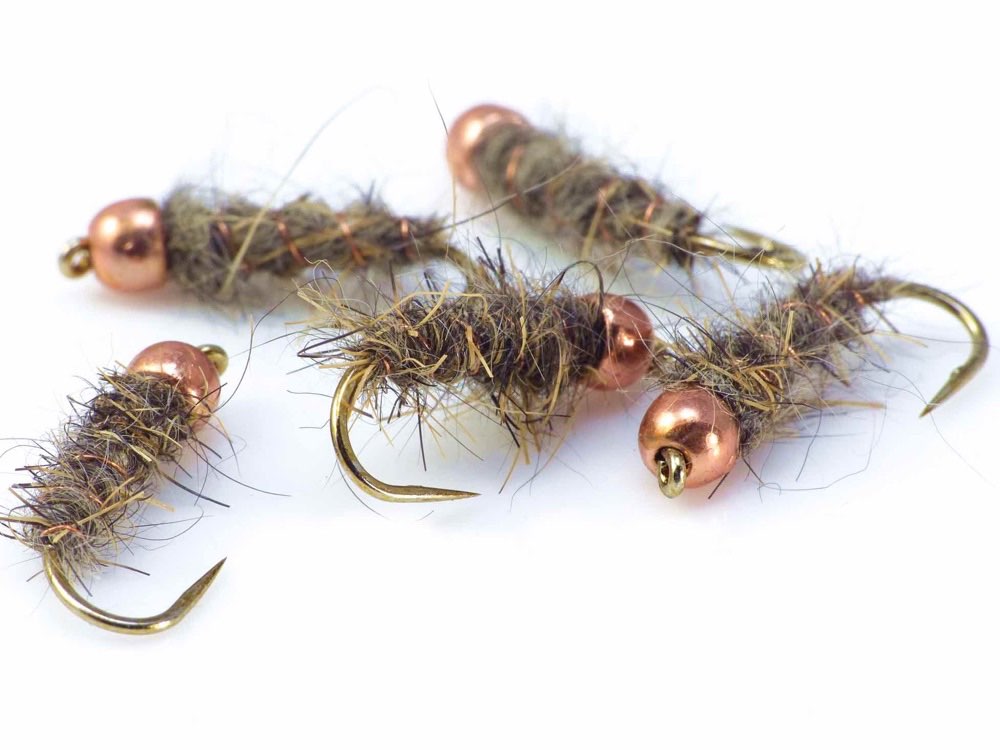 The Copperhead Nymph is tied with a tungsten bead and lead under-body to get down quickly. I like to think that it is a representation of a cased caddis. Such a simple nymph but it can be devastating, particularly when Czech nymphing when I use it as a top dropper fly! If I had to use just one nymph this would probably be it! Size 14. 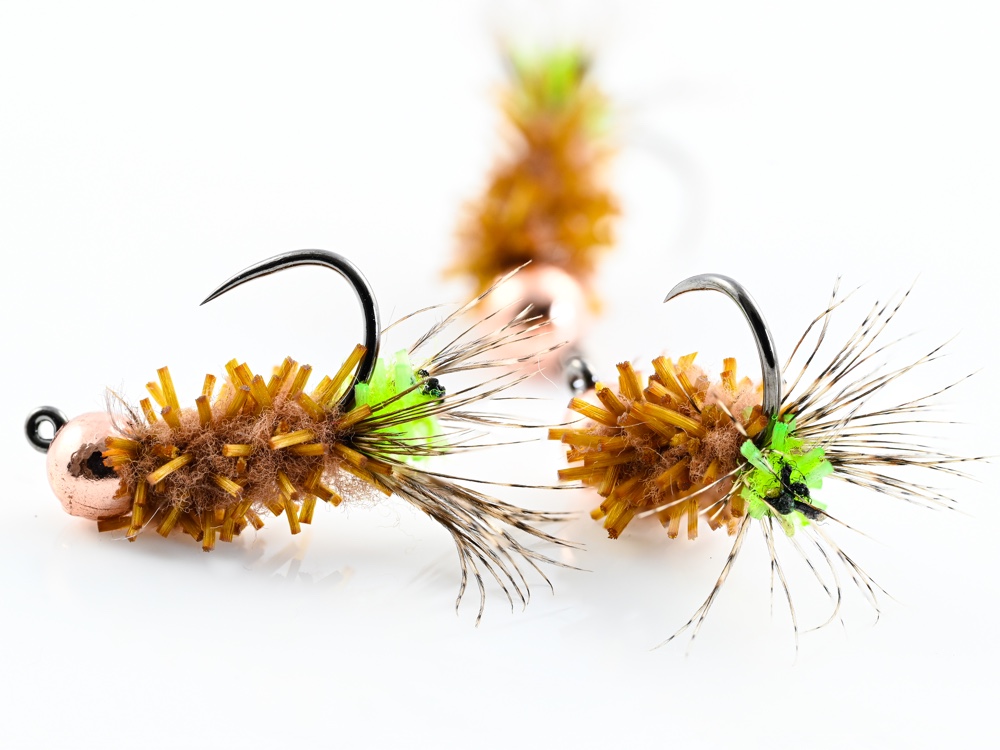 A new nymph from the talented Kieron Jenkins, which has become very popular over that last couple of seasons. An imitation of a cased caddis, using the popular FNF Chewing Gum Fritz, which looks very life-like and grubby when wet. The colour of the protruding 'grub' can be varied, though I prefer the chartreuse version. A particularly good grayling pattern but it takes its share of trout too. Sizes 8, 10 & 12. 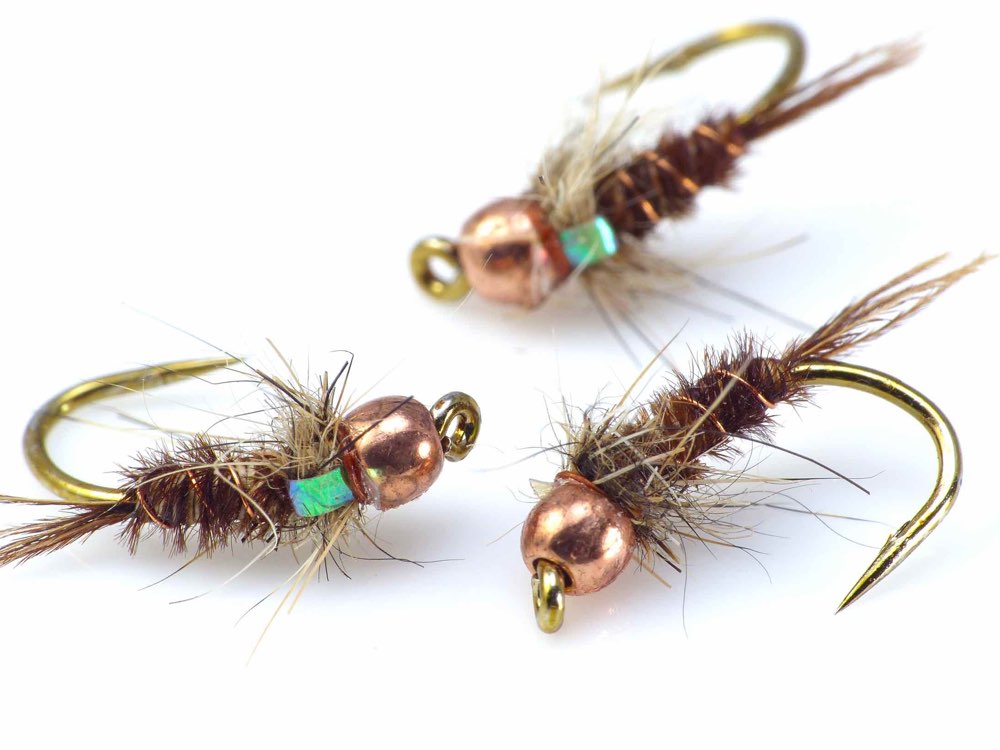 The Mary Copperhead owes its origins to competition fly fishing. It was one of the first tungsten bead nymphs on the competition scene and it remains as effective today as when it was first introduced. This fly uses a tungsten bead to fish at depth quickly and has a wing case of pearl to add attraction. It is used for fishing the 'duo' and 'trio' methods (teamed with a Pinkhamer), upstream nymphing and on a French Leader. A deadly and versatile nymph! Available in Sizes 14 & 16. 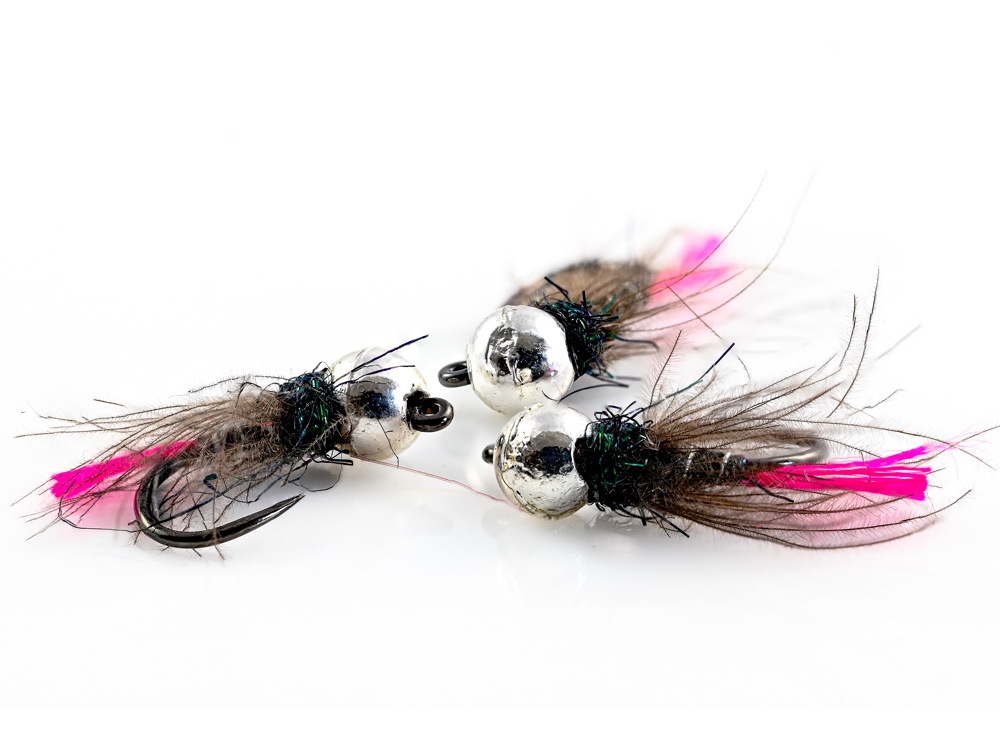 I read on social media about the success some anglers were having with the Pink Tag Jig Nymph, particularly for grayling. Not being one to miss out on such things I tied a few and quickly started to see what all the fuss was about, catching some very big grayling on it from the Scottish Borders. It has since proved very popular with trout and grayling closer to home and has become one of my favourite nymphs. This is a heavy fly with a slightly oversized tungsten bead, ideal for fishing tight-line (Euro style). Sizes 14 & 16. 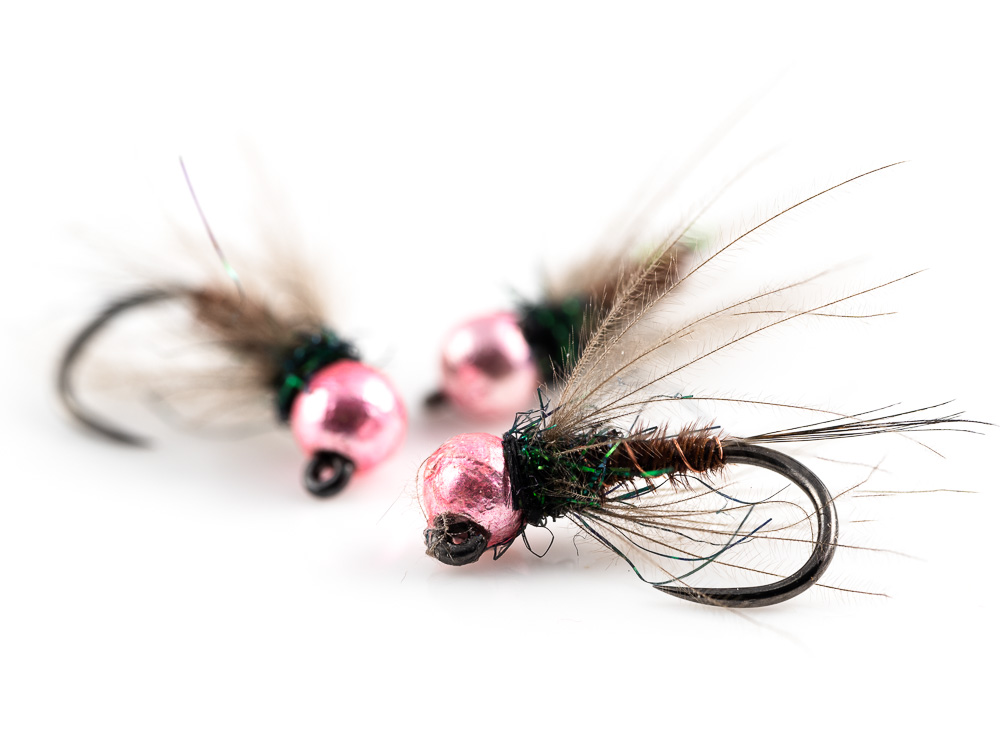 One of a few nymphs that I use which incorporates a metallic pink tungsten bead and it really seems to make a difference, with trout and grayling regularly singling it out. It can work really well even on tough days. A pattern that I put a lot of faith in, particularly for my winter grayling fishing. The body is pheasant tail with a hint of peacock flash at the thorax and a CDC hackle to give gill-like movement. A confidence pattern! Size 16. 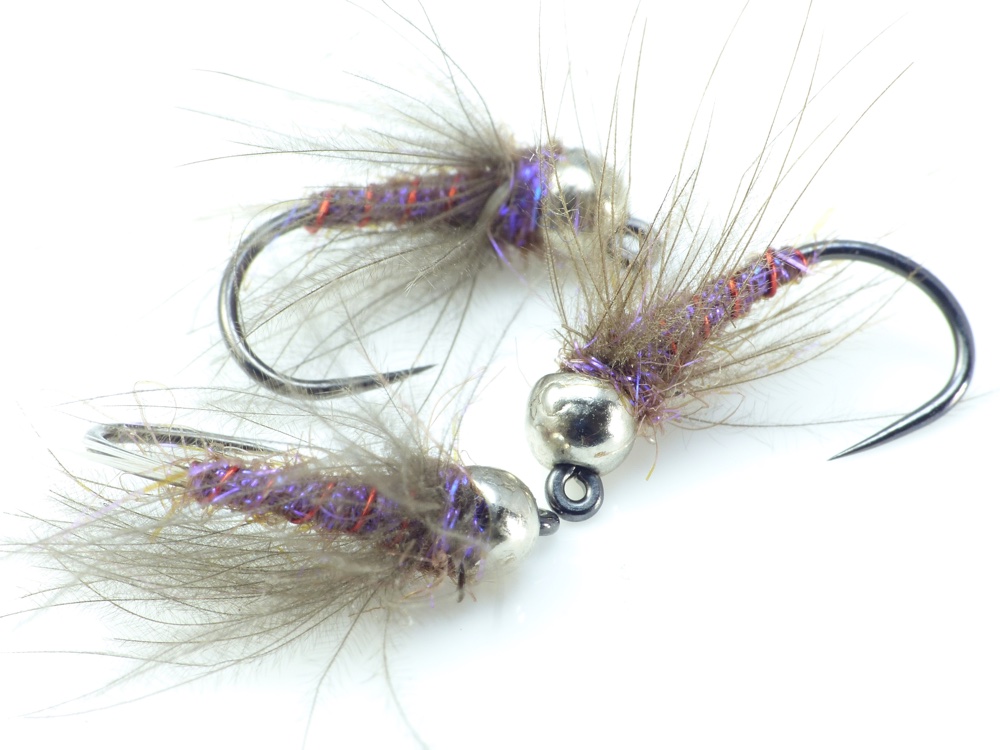 A fly from the Scottish competition scene. The body is made from a UV dubbing, which is very attractive to trout and grayling. The CDC hackle cloaks the body when fishing giving added movement and translucency to the fly. CDC is becoming quite a popular material for incorporating into nymphs. It traps tiny bubbles of air and its movement underwater imitates gills and legs of a live nymph. Tied with a tungsten bead on a jig hook so that it fishes point up, avoiding snagging the bottom. Highly recommended. Sizes 12, 14 & 16. 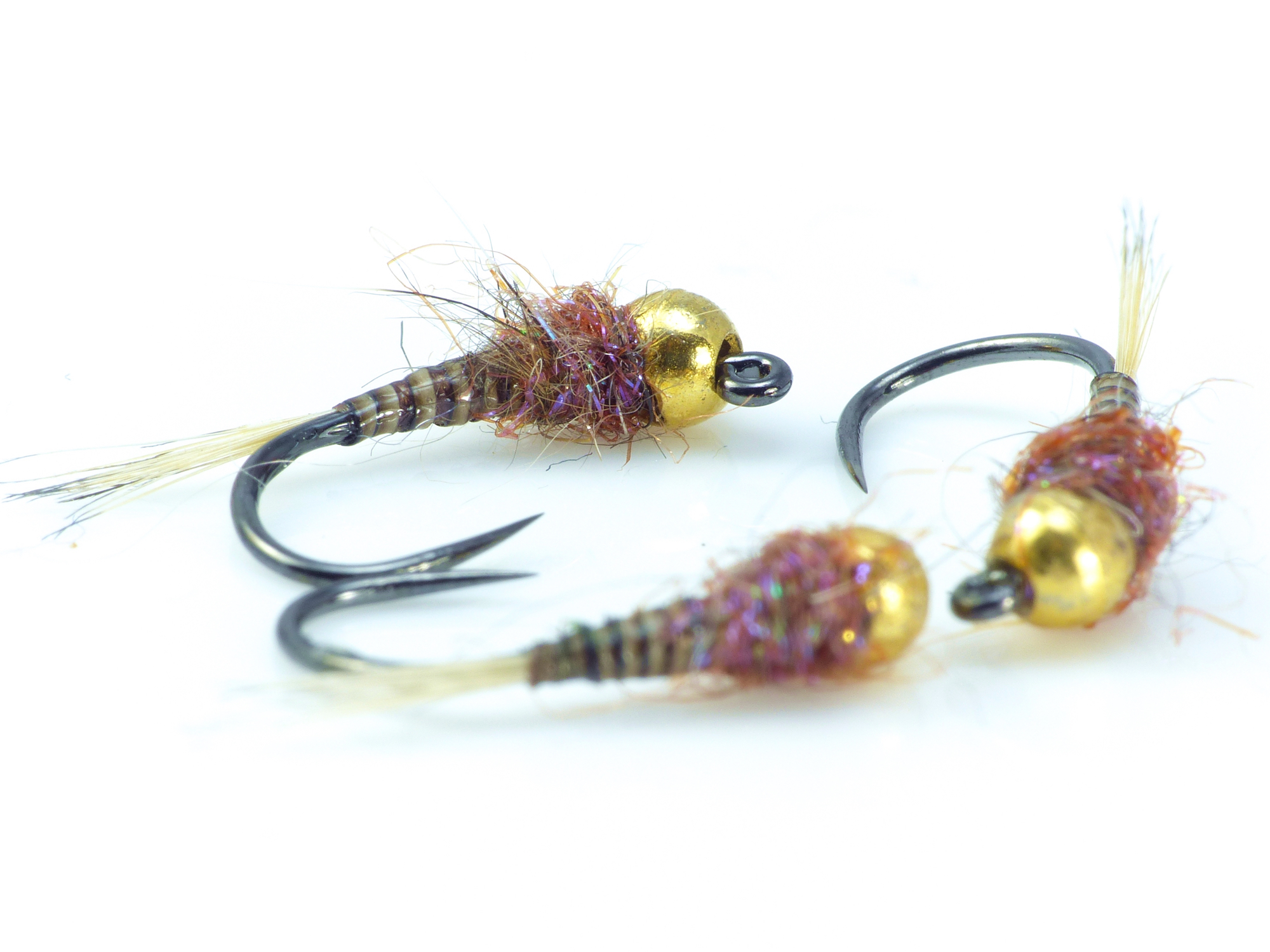 This is another tungsten bead nymph tied on the currently fashionable jig hooks. Jig hooks fish point up, meaning fewer snags on the bottom and in my opinion look the part as well. The quill body imitates the segmented body of a nymph and flashy thorax dubbing provides just enough glint to attract trout and grayling. This fly and the Duracell Jig above are both perfectly suited to fishing on French Leaders and the bigger two sizes are perfect for Czech Nymph type (short line) presentations. Sizes 12, 14 & 16. 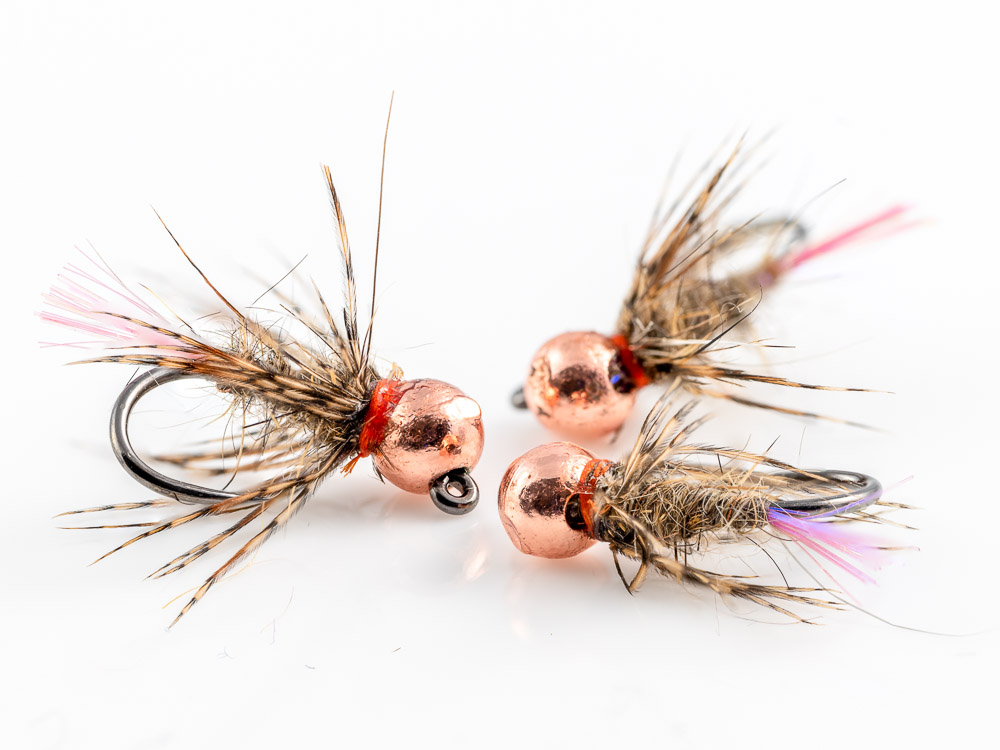 This deadly nymph has all the ingredients that are time proven to work. A subtle violet tail, dark hares ear body, brown partridge hackle and copper tungsten bead. The largest size with a 3.8mm bead is suitable as a point fly when Euro nymphing. The two smaller sizes can be fished anywhere on your leader and suit all nymphing styles. Available as follows: 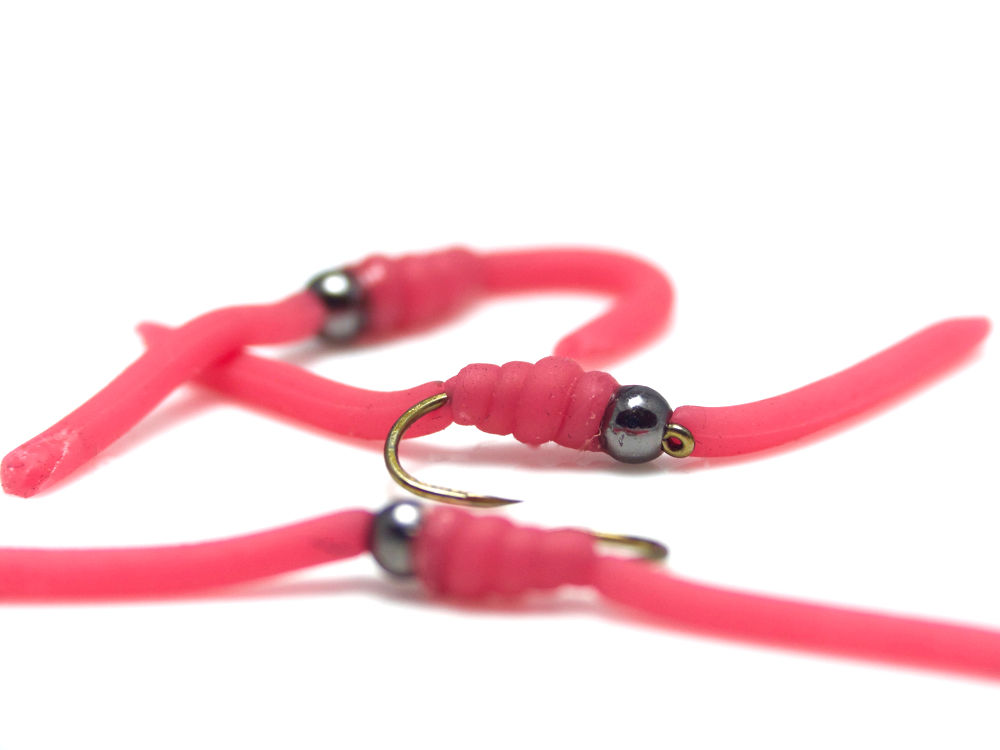 Loved by some, hated by others, no-one can question the effectiveness of the Squirmy Wormy! In fact, it is because it is so good at fooling trout and grayling that some anglers dislike it. I'm firmly in the 'love it' camp and a big fan of this fly. Originating in Scotland, it is a favourite of winter grayling flyfishers. It even works on lakes for rainbows. I have caught fish on this fly all over the country; in swollen rivers and low rivers; I've had grayling hit it as soon as it hit the water! It is best fished on a short line, Czech style, or on a French Leader. Available in sizes 8 & 12. 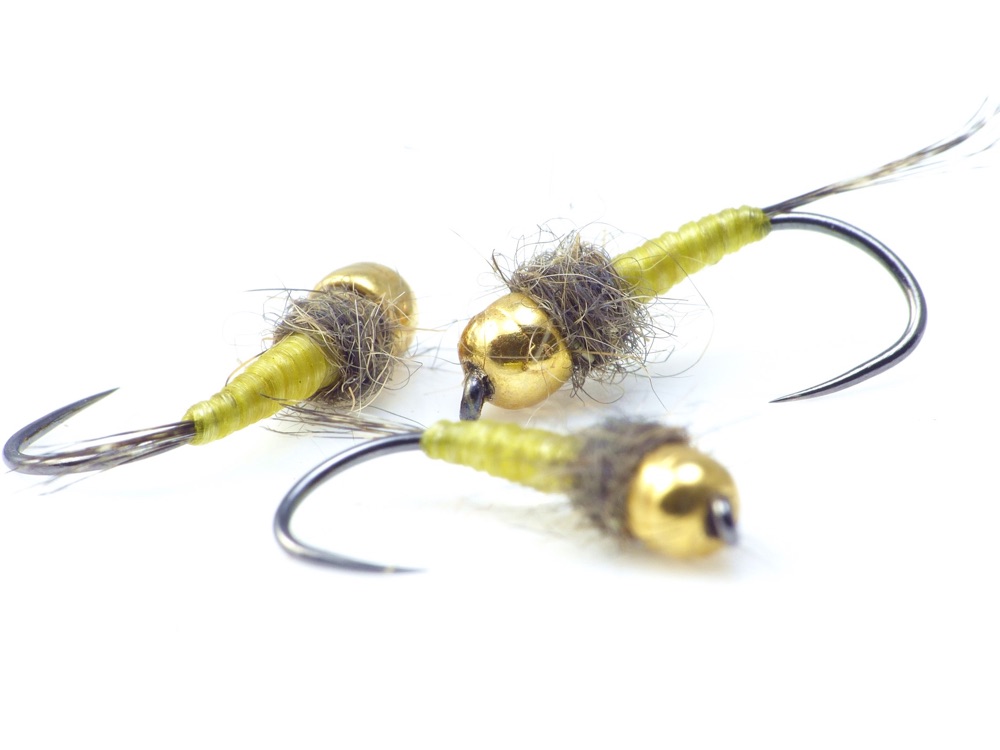 I started to play around with cat gut in my flies a few years ago and found it to be a very effective material. It gives subtle colouration to flies and just the right amount of translucency. This is a good pattern throughout the summer months and into autumn when the nymphs of the paler upwing species are active. Well suited to fishing on a French Leader. Sizes 16 & 18. 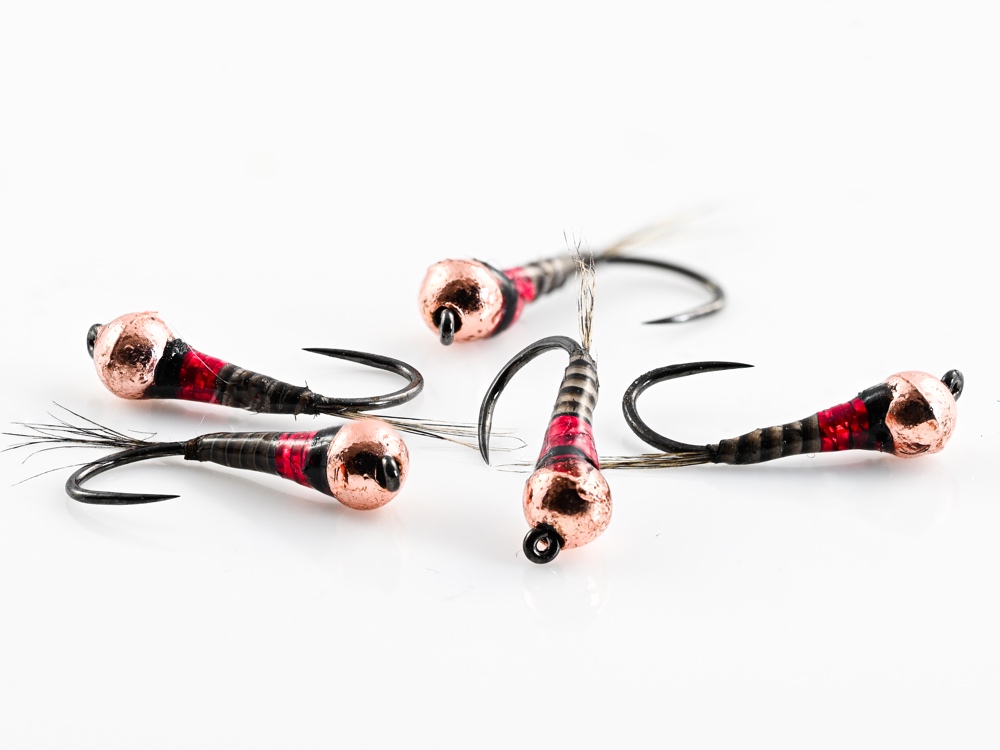 I first came across Perdigon Nymphs when fishing in Léon in Spain in 2014. The local tackle shops had row upon row of these beautiful little nymphs, in a large variety of colour combinations and sizes. I brought a few home with me and have used them since with great effect on northern rivers in the UK. Over the last couple of seasons they have become quite popular in the UK. They are small but sink quickly due to the tungsten bead and epoxied body. This version with quill and holographic red spot has been my most successful Perdigon. Sizes 14 & 16. 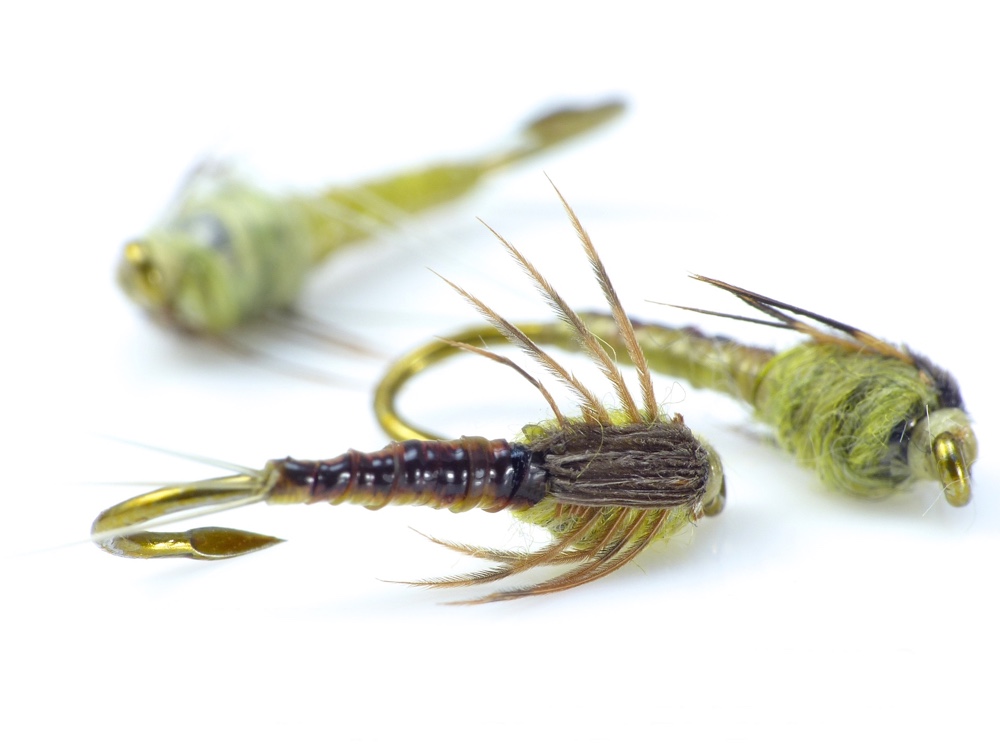 An early season nymph originated by my friend Oliver Edwards to represent the Large Dark Olive Nymph. Early season until May, this fly catches lots of trout, fished either upstream or in a team of wet flies. It is an intricate tying (hence the price) and incorporates many features of the natural nymph. Size 14 & 16. 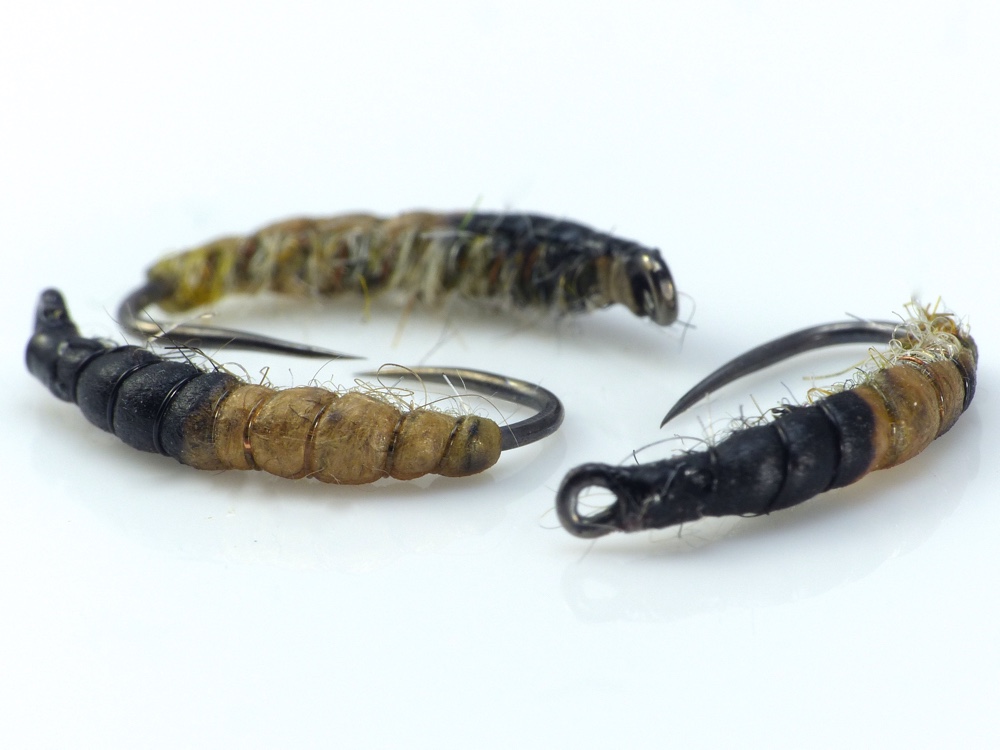 This version in grey, dark grey and brown with a black thorax cover is the perfect imitation of one of the most abundant caseless caddis larva - the Hydropsyche. 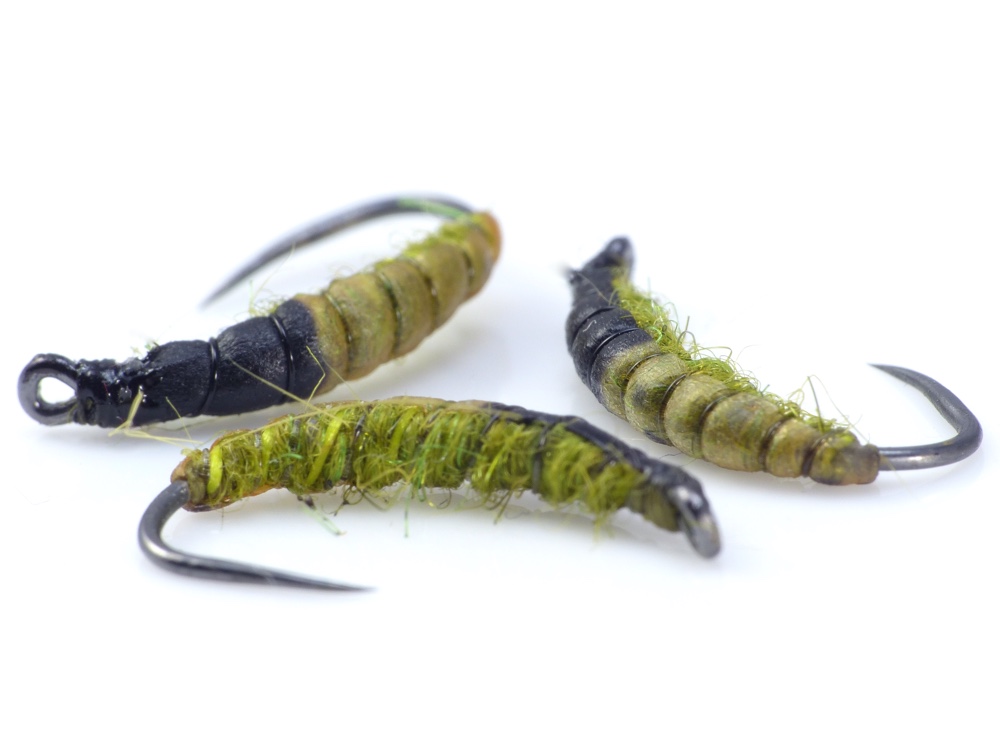 This version in olive with a prominent yellow rib, dark dorsal surface and black thorax cover is the perfect imitation of one of the most abundant caseless caddis larva - the Rhyacophila. 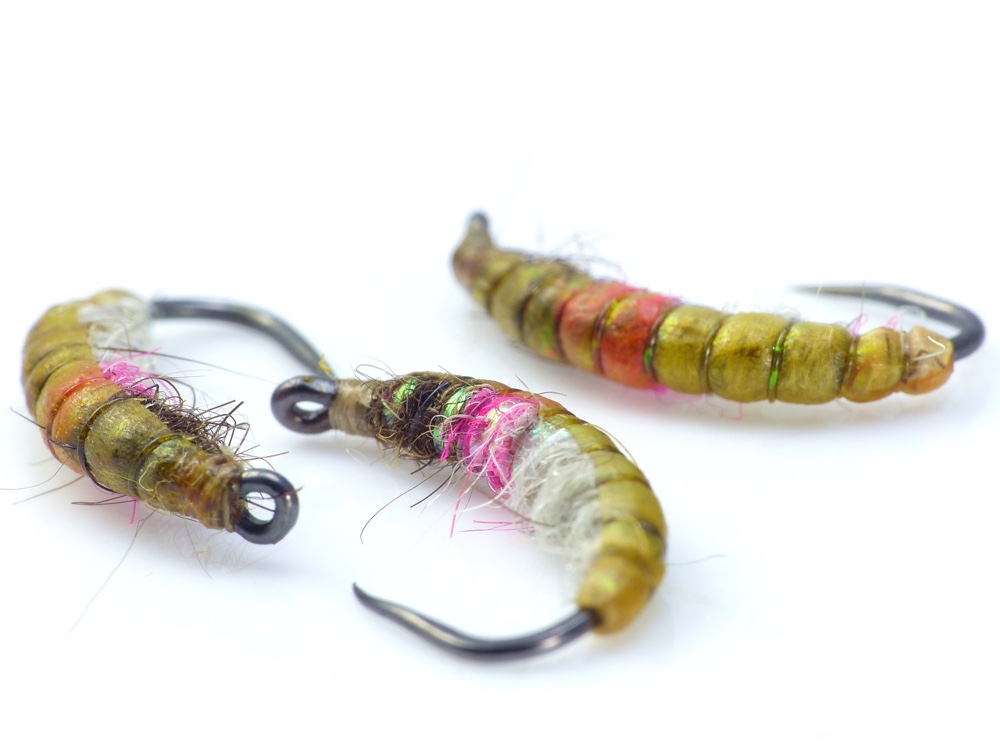 This version with a pink hot spot gives an added trigger. I've had days when grayling have singled out the hot spot version despite moving it up and my leader position. 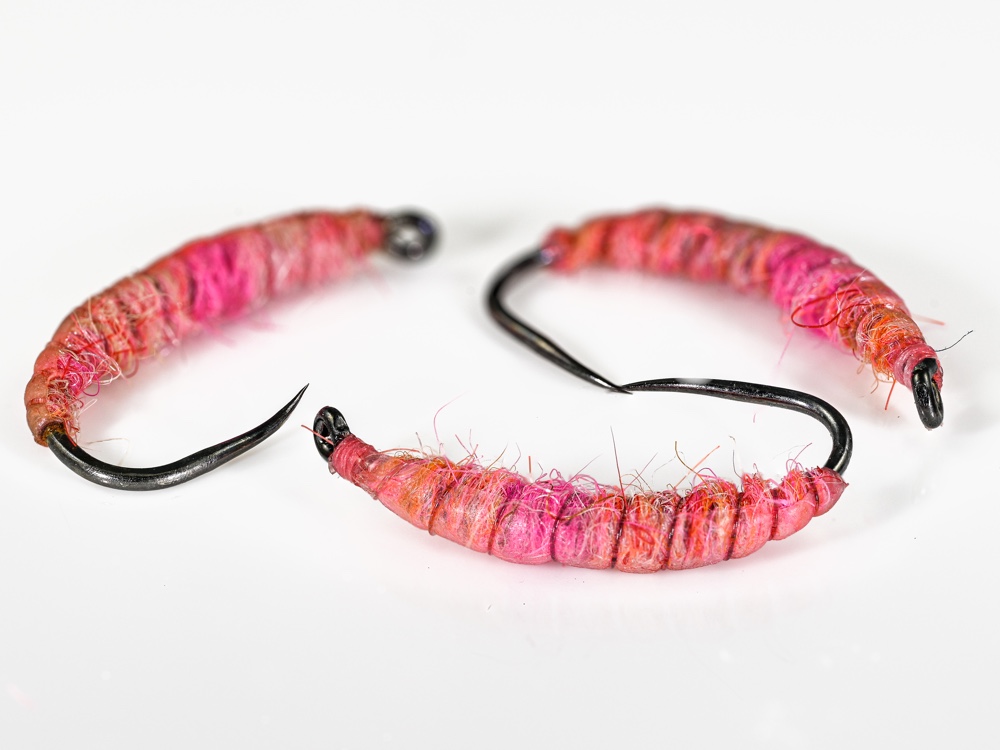 This version in bright pink can be outstanding. It has been successful for trout in coloured water and in exactly the opposte conditions for grayling, i.e. in gin clear water in the middle of a winter cold snap. 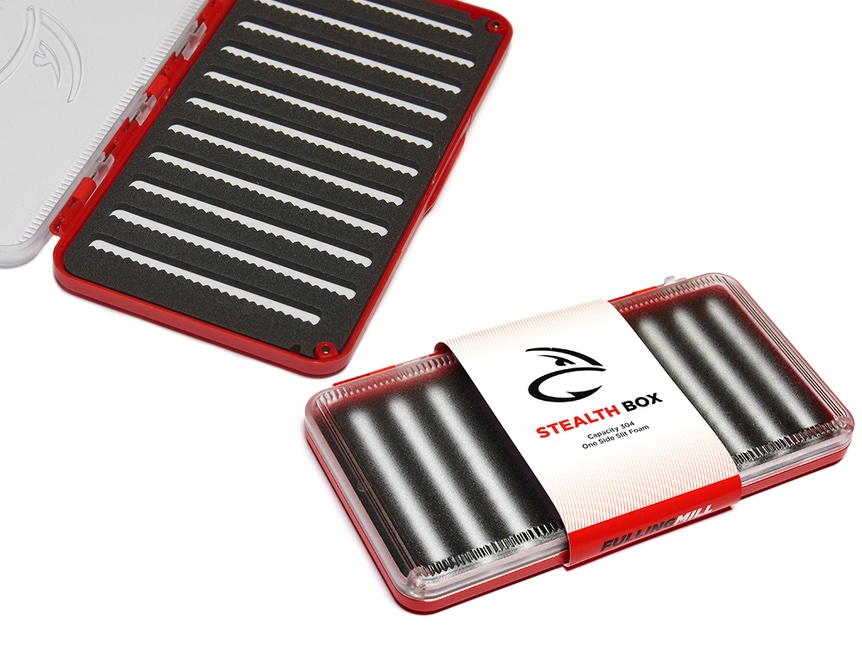 A selection of Fulling Mill fly boxes for your nymphs. 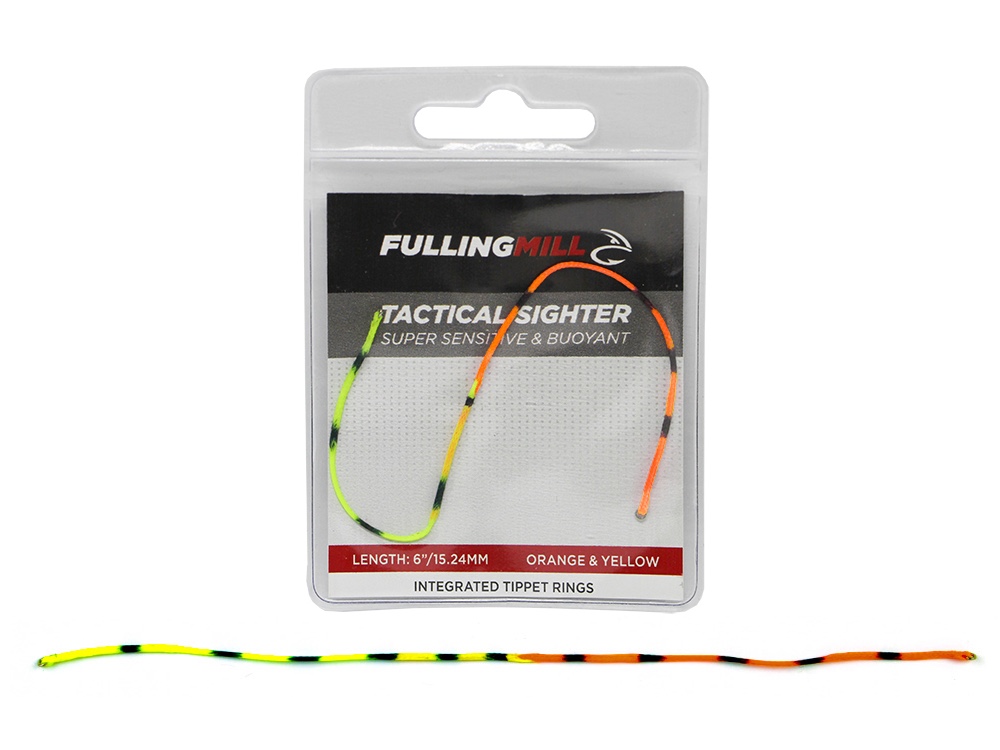 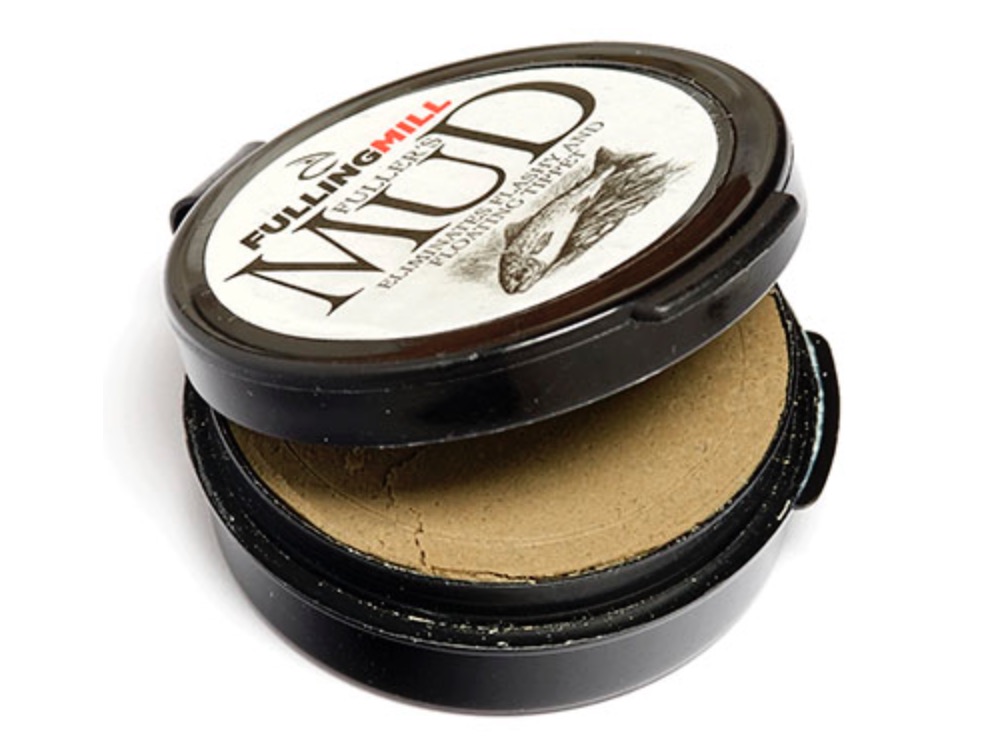 Sink your nymphs quickly by degreasing your leader and tippet.